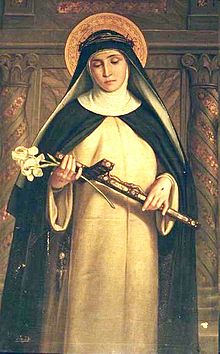 Born in Siena, Italy, Catherine (1347-1380) was the youngest of a family of twenty-five children whose father was a dyer and mother a local poet. The family belonged to a lower middle class status of tradesmen and petty notaries known at the time as “the Party of the Twelve.” The era in which she lived was marked by great political upheaval, plague and The Great Schism, referring to the very factious nature of the Catholic Church at that time. In fact, due to the many issues within the Church, the papacy had been established in France for nearly a century. What Catherine did to assist in the restoration of the papacy to Rome is often described as comparable to the Second Vatican Council.

From an early age, Catherine began to see visions and at age seven determined that she would consecrate her life to Christ and did so, although she never became a nun. Her contemplative life allowed her to grow in awareness of the wonder and necessity of Oneness in all things. And her quiet, radiant nature attracted people to her not only for spiritual insight but also as a counselor in practical affairs. She even got the ear of the Pope through her effort to return the papacy to Rome, an act she saw as ending yet another example of separation in the world. So influential were her efforts in this regard, she has been referred to within the Catholic Church as the Doctor of Unity.

Her short life ended in Rome at the age of 33. It is of more than passing significance that her life spanned the same number of years as our Lord’s. Venerated in her lifetime as a saint, she was canonized by Pope Pius II in 1461. In 1939, Pope Pius XII declared St. Catherine and St. Francis of Assisi as the chief patron saints of Italy. She was also proclaimed, along with St. Theresa of Avila, as a “Doctor of the Church”, the only two women so honored.

The name of our patron Saint has been variously spelled “Catharine,” “Katherine,” “Katharine,”and even “Kathryn”. There is some mystery here. Above the front door of the old grade school the title read “St. Catherine of Siena School.” It has been suggested that the name was changed by the first pastor, Father Matthew Hand, to conform to the name of his mother. This has not, however, been substantiated. So “St. Katharine” it remains for all official business.