“We, the people of Saint Katharine of Siena Parish, believe that we have been gifted with life, faith and discipleship. Empowered by Jesus in word and sacrament, we are called to grow in wisdom and grace, in fidelity to His Church, and in service to our brothers and sisters”.

In 1892, the developers of Wayne offered each denomination a parcel of land with the provision that a church be erected on the site within three years and that it cost at least $25,000 (over $1 million in today’s money). If these provisions were not met on schedule, the ground and any interim improvements would revert to the donors. With a congregation of only 70 families, the task seemed daunting. Other denominations were well established but Catholics within the parish boundaries were few and mostly poor. However, due mainly to the dedication and sacrifice of poor Irish working women, the cornerstone was laid and the original church was dedicated in 1895. In 1916, the first St. Katharine’s school opened with 168 students. 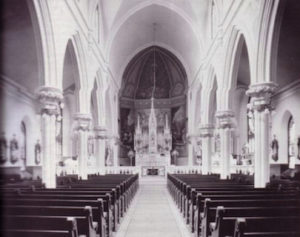 Over the years the parish grew to accommodate the ever-increasing population of the Main Line. By the early 1960s, the parish had over 900 families. The church could only accommodate 400 people and it became clear that additional space was needed. The old church was demolished, and in 1966 the present structure was built on the site.

To celebrate the centennial of the parish in 1993, some 250 people labored lovingly over two years to produce a history book of St. Katharine’s first hundred years. It took as its theme, “We Remember, “We Celebrate”, We Believe.” It can be seen in the Rectory or Library.

As the number of parish families continued to grow, the need for additional space for parish activities became a priority. In 1998, St. Katharine’s undertook a capital campaign to fund the addition of classroom and administrative space to the school; the demolition of the existing gym/parish center and the construction of a new gym/parish center. Over the next year and a half, St. Katharine’s parishioners generously and enthusiastically supported the $4.5 million campaign to “Continue the Tradition”, and in April, 2000, the new facilities were dedicated. 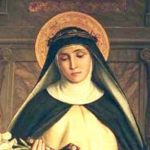 Born in Siena, Italy, Catherine (1347-1380) was the youngest of a family of twenty-five children whose father was a dyer and mother a local poet. The family belonged to a lower middle class status of tradesmen and petty notaries known at the time as “the Party of the Twelve.” The era in which she lived was marked by great political upheaval, plague and The Great Schism, referring to the very factious nature of the Catholic Church at that time. In fact, due to the many issues within the Church, the papacy had been established in France for nearly a century. What Catherine did to assist in the restoration of the papacy to Rome is often described as comparable to the Second Vatican Council.